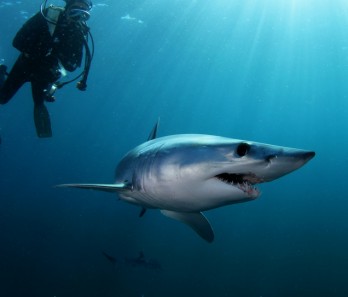 If the thought of swimming with sharks has you excited rather than terrified, you’re in luck. There are many places to encounter these often misunderstood predators, with Cape Town, South Africa being the best place for shark spotting.

As a well-known shark hotspot, the waters of Cape Town’s coastline are home to many different shark species. False Bay in particular is where the famous ‘flying’ Great white sharks are found. These sharks prey on marine species such as seals, which are found in abundance near Seal Island. The sight of a huge Great white launching itself out of the water after its prey is not one you will forget easily. While swimming with sharks such as Great whites is not possible without the safety of a cage, the chance to view these giant creatures in their natural habitat is one that every nature enthusiast should experience at least once in their lives.

Swimming with Sharks – What to Expect

There are many different options to consider when swimming with sharks, and depending on the type of sharks, you can either cage dive, snorkel or scuba dive with sharks in Cape Town. Some of the best ways to come to face with sharks include the following:

While swimming with the ocean’s largest predator is sure to get the adrenalin pumping, it is also important to remember to keep safety first in mind. Don’t ever attempt to swim on your own in known shark areas, and rather book your shark experience through a reputable dive company that will have you swimming with sharks safely in no time at all.