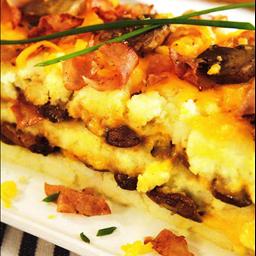 A Paptert Recipe or Paptert Resep that will have everyone coming back for seconds!

When putting a lekker “pap tert” (directly translated: porridge tart) out on the table at a braai don’t be surprised when people ask you what it is, and even getting a few strange looks when this strange combination of words come out.

While most South Africans are well-acquainted with maize porridge – or “pap” – as we know it, there are a few people who would rather not have themselves associated with this staple, which I find absolutely disgraceful – as it’s such a delicious – and truly South African dish. But although the pretentious ones see maize porridge as “poor people’s food”, it is getting quite popular.

Since I grew up on a mielie farm – with my dad milling his own maize meal, pap is an absolute must-have when it comes to a braai – whether as “krummelpap” with tomato and onion relish, or as a pap tert.

As with all recipes there are always variations. But for me – the best pap tert is done according to the recipe below. This recipe is guaranteed to have your guests coming back for seconds – some may even want to take a little home for later…

Don’t forget to rate and comment if you try this!